Optimal weather conditions in Germany on the 8th of May led to so much renewable energy being produced that prices temporarily turned negative, and commercial customers were actually being paid to use electricity.

During the morning last Sunday, particularly high levels of sun and wind meant that between Germany’s solar, wind, hydro and biomass power plants, a total of 55 gigawatts of power was generated, making up almost 90% of the 63GW generated that day. This beats the previous peak of 75%, set one day last year.

During this period of peak capacity, several gas plants shut down for a time. But the speed and scale of the temporarily but massively increased productive capacity of renewable plants meant that coal and nuclear plants could not react quickly enough, hence the massive surplus turning prices negative. 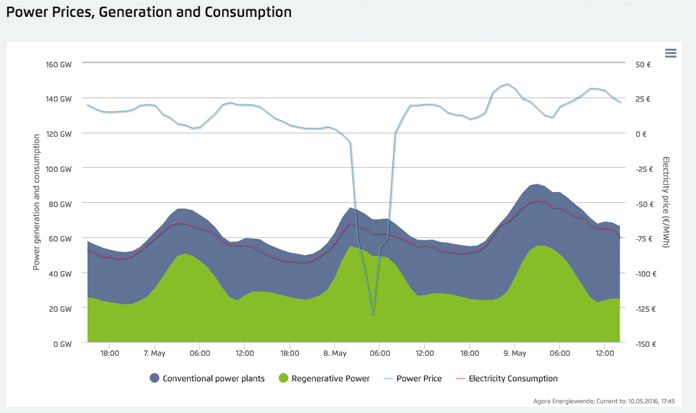 The data from Sunday is reminiscent of one July say in 2015, when particularly high levels of wind meant that Denmark’s wind farms generated 140% of the country’s consumed energy. Rather than leading to a massive domestic surplus though, the interconnected power supply in Denmark and neighbouring countries meant that 80% of the power produced was sent to Sweden, Norway and Germany.

This marks an important landmark success for Germany, whose energiewende (energy transition) policy has been pivotal in efforts to decarbonise and has set an example to be followed throughout Europe and the rest of the world.

According to figures from thinktank Agora Energiewende, renewable sources accounted for a third of the Germany’s total energy mix last year, and that figure is only set to increase as more wind farms continue to be built.

Speaking to business news website Quartz, Christoph Podewils, of Agora Energiewende, said: “We have a greater share of renewable energy every year. The power system adapted to this quite nicely. This day shows again that a system with large amounts of renewable energy works fine.”

Germany’s intention is to become wholly reliant on renewable sources by 2050, and to cut down emissions before then so that by 2020, they are emitting 40% less carbon than they were in 1990. These pledges formed part of their efforts to help to achieve the grand targets set at the Paris Climate Change Summit at the end of last year.